Seattle handled their business with Detroit and now look ahead to Atlanta.  They not only came away with the victory, but they also built up some serious momentum going into the Divisional round of the NFL Playoffs. Two games now stand between the Seahawks and another shot at a Super Bowl title.

Unlike previous seasons where we saw Seattle's offensive production intensify in the month of December, it appears as though they waited until January to get things sorted out this season.  The offensive line was outstanding as they paved the way for Thomas Rawls to set the franchise's single-game playoff rushing record.

Paul Richardson put on a receiving clinic against the Lions.  The former Colorado Buffalo made three
separate receptions that could have rivaled some of Odell Beckham's top plays.  Doug Baldwin added a few great snags of his own, including a touchdown reception he stole right out from under Jermaine Kearse.  After the game, Baldwin said he felt terrible about robbing his teammate of a piece of the glory. 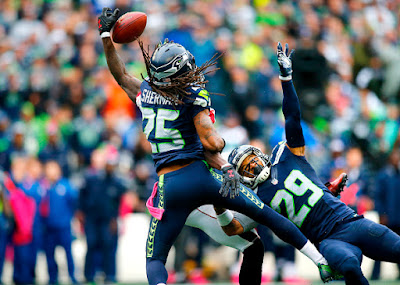 Seattle will need to build upon this solid performance this weekend when they take on MVP front-runner, Matt Ryan and his Falcons.
The Seahawks had the best defensive performance of any team in the Wildcard round and they will be heavily leaned upon if Seattle has any hope of advancing.

Former Seahawks defensive coordinator, Dan Quinn, has assembled an impressive team as the head coach of the Atlanta Falcons.  His offense can move the ball through the air effortlessly and their two-headed run game has been among the league's finest.  Defensively, they're middle of the road.

Former UW standout, Desmond Trufant, is out for the season which is a significant blow to Atlanta's secondary. If Rawls plays half as well as he did against Detroit, Russell Wilson should have no problem picking apart the Falcons defense.

Keep in mind, while the Seahawks 2013 season ended on a last minute field goal by the Falcons in the divisional round of the playoffs-- that's the past.  This year, mind you it was in Seattle, the Seahawks defeated the Falcons without Kam Chancellor, Michael Bennett and Thomas Rawls.

Not to mention, Russell Wilson was arguably at his most-injured point in the season.

This will be a tough game for both teams.  Seattle has the experience and the momentum, but Atlanta is well rested and plenty capable.   The key for the Seahawks will be shutting down the Falcons offense and controlling the clock. If Seattle can keep the Falcons under 20 points and collectively put up 100 rushing yards, they will advance to the Conference Championship.
Posted by Chris Collier at 9:08 AM