Another NFL Season in the books

Another season passed, another Patriots championship.

Certainly everyone outside of the New England area has had their fill of seeing Tom Brady hoist the Lombardi Trophy.  There's no doubting his greatness at this point-- he is the most complete quarterback to ever play the game.

He's not the most accurate, he doesn't have the strongest arm, he's not the most mobile nor is he the smartest.  He's really, really good in all of those areas, but I wouldn't put him #1 in any of those categories. He is, however, the most competitive.

He also happens to have spent his entire professional career under the tutelage of the greatest coaching mind in the history of organized sports. As much as it pains me to admit it-- Bill Belichick is the real G.O.A.T.

Mistakes that Tom Brady and his teammates will capitalize on.

We all watched the Falcons choke away a tremendous lead in the Super Bowl on Sunday.  They flat out outplayed the Patriots through 3 quarters before inexplicably imploding, sending the game into the first overtime period in Super Bowl history, and rolling over as Tom Brady marched his offense right into the endzone for the game winning score. 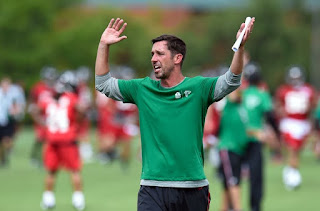 Both teams were pretty evenly matched, but Atlanta boasted the better running game.  You would think that the team that could control the clock on the ground would have the advantage-- and that was indeed the case for the vast majority of the game.

But down the stretch, it looked as though Kyle Shanahan started trying to outsmart the Patriots, rather than play to their strengths.  It wasn't long before their foolish playcalling created opportunities for Tom Brady to do Tom Brady-things.

Dan Quinn must have felt a tremendous sense of Déjà vu after the final whistle blew. After all, he was on the sidelines as the defensive coordinator of the Seahawks when they tried to outsmart the Patriots in Super Bowl 49.

It's not that Belichick, Brady or the Patriots are especially smart.  They simply do not stray from the 'Patriot Way'.

In Super Bowl 49, Seattle had the superior team.  I think the Patriots would've told you that in a private moment.  The Patriots know what they want to do and they're going to do it.  They'll tweak the gameplan here and there as needed, but they never venture far from what they had planned all along.

Admittedly, I haven't watched the Patriots terribly closely throughout their dynasty, but I've paid especially close attention the past few years.  The one recurring theme I've noticed over that period is that they do not waiver.

That is not to say that they don't make adjustments.

You absolutely have to make small adjustments throughout every game.  Too many NFL coaches and coordinators are too proud and bullheaded to admit when the strategy they rehearsed all week isn't cutting it in the game.  We've seen innumerable examples from our offensive coordinator, most notably the goalline pass that dashed our Super Bowl hopes against New England.

Next year should be interesting.  We've got a few new faces as first time coaches.  Kyle Shanahan will be joining the NFC West as the new 49ers coach and the Rams have a new coach who is 4 years younger than I am.  I would like to see the Seahawks take a page out of Belichick's book and play to whatever strengths surround Russell Wilson.

You can't bank on having draft classes that yield 5 starters and 3 perennial Pro Bowlers every year.  Additionally, you can't pay everyone a big-time contract.  You have to put together the most talent you can fit under the cap to surround your core players and play to their strengths while minimizing their weaknesses.

I know that sounds oversimplified, but its astonishing how rare you see it in action.

I'll leave you with the perfect example of that sentiment not being executed.  The Seahawks best player (Marshawn Lynch) retires.  The were unable to replace his production through the draft or free agency, so they were dependent upon Thomas Rawls recovering from injury and taking over that workload.

When injury setbacks prohibited that, you would think that the Seahawks would adjust their philosophy from being 'run first' to 'make use of your $100-million quarterback, Jimmy Graham and Doug Baldwin'. It seemed plain as day to alter the offensive gameplan to be more pass heavy, given the incredible production we saw from Wilson and Baldwin down the stretch of the previous season.


But that never happened.

Instead, they continued to beat the dead horse we know to be Christine Michael.  When Rawls was finally healthy, too much was expected of him. Seattle had spent all of their offensive resources on their quarterback and pass catchers, yet maintained that they were a running football team throughout.

This season was mindbogglingly frustrating because of that.  If Seattle had adapted a New England's offensive strategy-- spread out multiple receivers and pick the defense  apart with quick, short passes-- it would've taken a huge load off of the offensive line and backfield and more than likely would've helped secure home field advantage for the Seahawks.

As well as the Falcons had played through the playoffs and right up until the 4th quarter of the Super Bowl, its hard to say whether home field advantage would've been enough-- but it would've been a hell of a lot more entertaining to watch .

Posted by Chris Collier at 5:18 PM