Every year, sometime not long after the Lombardi trophy is hoisted, I start to tune out all the football chatter that had gotten me through the past 6 months. I make the transition away from ESPN radio and toward the Howard Stern show.  I largely ignore Sportscenter in favor of binge watching my favorite sitcoms.

I don't start dipping my toe back into those waters until the Draft has concluded and I start to get the itch for real football.  Everything in between the conclusion of the Super Bowl and the start of training camps is pure speculation and gossip-- and that stuff is nothing short of infuriating to me.

This is one of my first posts since the season wrapped up and I would just assume not be writing it.  However, all this Richard Sherman talk has me so incensed I cannot keep my mouth shut any longer.

John Schneider, the General Manager of the Seahawks, was asked if the team would be interested in trading it's start cornerback.  Schneider responded diplomatically saying:

"We listen to like everything you would think. We're in a lot of stuff. We try to pride ourselves on that. I think I've told you guys before we walk away from 98 percent of the deals that we're involved with or talking about."

Somehow, that was blown tremendously out of context and reinterpreted to mean that the Seahawks were desperate to be rid of the 4-time Pro Bowl cornerback. 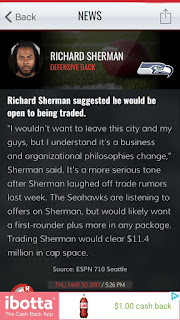 The nonsense was further perpetuated by Sherman's equally civil response, saying that he understands that football is a business. Specifically, he stated “I wouldn’t want to leave this city and my guys, but I understand it’s a business and organizational philosophies change.”

The headline that accompanied that statement drew the ridiculous conclusion that "Sherman is open to being traded".

Local radio host Jim Moore wrote a smugly-titled piece "Sherman would look good in Brown" where he acknowledges the fact the entire concept of his story is grasping at straws, even quoting the great John Clayton as calling the story "A media creation".

Whether or not Moore is willing to admit it, he has some disdain for Sherman.  Moore was the media member Sherman famously sparred with during a press conference. While Moore claims to hold no ill will, its evident in his writing that is not the case.

Moore isn't the only Seahawks fan that has had enough of Sherman's 'act'.  Social media is rampant with so-called Seahawks fans that took some sort of umbrage with the outspoken corner.  Some folks are upset with his sideline blowup against Darrell Bevell, others don't like that he denied the altercation with Moore ever happened and some people just don't like the fact he has his own strongly held opinions.

To those people, I'd like to say "Pull your head out of your collective asses."

First of all, if you call yourself a serious Seahawks fan, you can't possibly begin to tell me that there hasn't been a single instance where, in your own living room, you erupted in fury over Bevell's actions (or inaction).   Maybe Sherman's outburst was best saved for the locker room for the sake of professionalism, but outside of that exception-- not only do I agree with Sherman, but I applauding him for caring so much about winning that he let his emotions get the better of him.

Too many professional athletes, especially those who have earned the big payday and multiple endorsements, start to place their career longevity ahead of doing whatever it takes to win.

As for the outrage stemming from his denial of the altercation with Moore-- who gives a shit?  What does this have to do with the Seahawks winning games? Absolutely nothing.  It's irrelevant, offseason gossip.  If that garbage is important to you, I suggest you trade your sports package for Keeping Up with the Kardashians.

All the jackasses that think players should keep their opinions to themselves and simply 'Shut up and do your job" are to ignorant to reason with. These meatheads think that their ticket/jersey/cable subscription somehow entitles them to have a place in the boardroom of the team's front office.  Guess what, dipshit?  It doesn't.  These players are human beings that are entitled to their own beliefs and opinions.  It just so happens that they get asked their opinions because fans are so blood thirsty for content, it had created an insatiable need for football-related news.

But for the sake of argument, lets throw all of that out for a moment.  Lets assume that the Seahawks are legitimately open to trading Sherman.

Sherm is currently under contract through the 2018 season, at the end of which he will only be 30 years old.  He's been among the best, if not the best at his position since he came into the league and has shown minimal signs of regression.

They say that last year was a slightly down year for him, but there are so many extenuating circumstances that could have attributed to that.  Seattle's lack of a run game kept their defense on the field too much last year.  Wagner, Wright, Chancellor, Thomas and Lane all battled with injuries and missed time at different points in the year.

The Seahawks collectively took a step backwards last season and it was in no way any fault of Richard Sherman's.

So, we have established that Sherm has two seasons left on his contract and still plays at a elite level.  That would certainly make him a valuable trade piece for any team, but there's one issue that I feel is being vastly overlooked in this hypothetical scenario.

The cornerback group is arguably the weakest, most vulnerable position group on this team.

Take Sherman out of the group, because that's exactly what trading him would do.  Now you have
Jeremy Lane, who had an up and down year coming off injury.  DeShawn Shead might not even be available until midseason as he recovers from injury.  Neiko Thorpe and Deandre Elliot were great special teams contributors last season, but would you feel comfortable sliding either of them into the starting lineup?

To remedy the vacancy left by Sherman, you would have to either trade for a corner, which seems pointlessly redundant, or draft one.  I would love to see the Seahawks add some defensive back help through the draft, but I'm extremely uncomfortable banking on a rookie to come in and start with a fraction of Sherman's effectiveness.

What would you want in exchange for Sherman?  Draft picks?  Offensive Linemen?  An offensive weapon?  I think Seattle could satisfy any of those needs just as easily without giving up one of the franchise's best players.

I'm going to tell you the same thing rational people have been communicating in the wake of our disastrous presidential election-- don't perpetuate false news.  Read what is being discussed and judge for yourself if the evidence provided in the article supports the claim in the title.  Question what you read, especially this time of the NFL season.

It simply doesn't make a lick of sense for Seattle to trade Richard Sherman.  You don't improve a team by taking away talent.  Even if Seahawks brass were growing tired of Sherman's 'antics', I would hope that they could find a way to work around that since it is obvious that both sides share the common goal of winning and bringing more Championships to the Seattle Seahawks.