Don't Rely on the Draft

The Richard Sherman trade rumors continue to swirl, thanks to John Schneider fanning the flames on local sports radio.

While I hold true to my belief that there isn't any legitimate bad blood between Sherman and the organization, I do believe that this story was perpetuated by Seahawks brass in order to 'teach a lesson' or 'show the players who's the boss'.

If that is indeed the case, I really hope Pete & John don't fuck up the team chemistry just to prove a point.

Still, a strong contingency of fans appear to be content with Sherman's departure.  I have yet to hear a single, logical trade scenario-- proposed by teams or fans -- that makes any sense to benefiting the Seahawks.  I suppose the belief is that Seattle will score some high-round draft picks that we're certain will turn into the next Richard Sherman.

But should we still be putting so much faith in the Seahawks draft abilities?

There's no denying that in their first 3 seasons at the helm, Pete Carroll and John Schneider struck gold in the draft.  Let's take a look at those 3 draft classes. 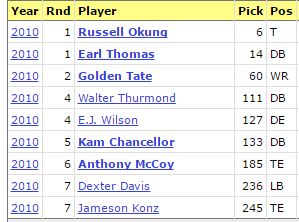 Talk about hitting the ground running.  In their first draft together, P & J scored on several picks. They found a solid, starting Left Tackle to build around and a future Hall of Fame candidate in Earl Thomas just in the first round alone.  Golden Tate took a while to get going, but he was integral in Seattle's first Super Bowl victory.  He continues to do great work in Detroit.  Kam Chancellor was a steal in the 5th round and continues to be the centerpiece of the defense.  Even Anthony McCoy had his moments. 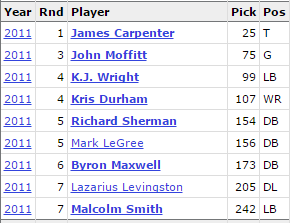 Another stellar draft class as the team continued to find it's identity.  James Carpenter was a bit of a reach in the first round, but he continues to be a serviceable lineman in the NFL today.  3 solid defensive picks in the middle rounds came out as home runs-- KJ Wright, Sherman and Brandon Maxwell. Late 7th round selection, Malcolm Smith, was a Super Bowl MVP.  Hard to say this class was anything short of outstanding. 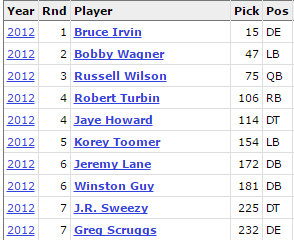 Three drafts in a row where the team did phenomenally.  It's no longer a matter of just getting lucky-- these guys seem to really know what they're doing. This might well be Seattle's best draft in franchise history-- and they were given a failing grade almost unanimously by sports writers everywhere. Looking back, the first three selections, were undeniably great.  Bobby Wagner and Russell Wilson are two of the best players in the league today.  Bruce Irvin is only with the Raiders today because we couldn't afford to keep him.  Turbin, Howard, Toomer and Sweezy all recently signed new contracts with other teams.  Jeremy Lane is projected to be this team's starting nickel corner.  If there is another draft class where one team acquired this much talent-- I haven't seen it.

Since then, I would argue that the team hasn't been nearly as 'lucky' as they have in past seasons. 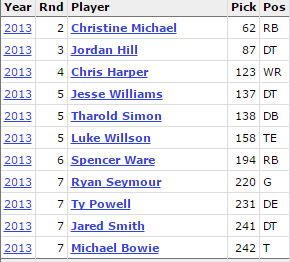 Compared to the previous three drafts-- this one was a colossal failure.  Although Spencer Ware, Ty Powell and Michael Bowie caught on with other teams to varying levels of success,  most of the players from this class did not.  Luke Willson is the obvious exception, as he was just signed to an extension by the Seahawks.  Jordan Hill was serviceable for Seattle, but ultimately did not carve out a role.  Christine Michael looks to continue to disappoint fans in Green Bay next season. 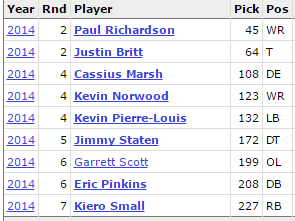 Better than the previous year, the 2014 draft was still disappointing.  Richardson has flashed moments of brilliance but has failed to stay healthy.  Justin Britt shifted around the offensive line before finding a home at center. Cassius Marsh, Eric Pinkins and KPL have been decent role players, but this draft hasn't panned out as well as hoped. 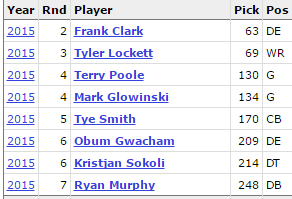 The top of this draft class has been developing really well.  Lockett and Clark are both on the verge of being next-level type players.  After that, you may as well throw darts at the draft board. 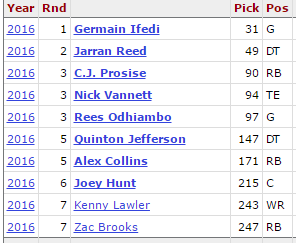 Obviously, far too early to assess last years draft class, but there certainly isn't anyone who jumps off the list.  Jaran Reed contributed the most from this class, but we'll see if he can develop into the Brandon Mebane replacement we were looking for. We're hoping Ifedi can develop into the starting right tackle we need after spending last season at Right Guard.  Prosise could be a legit playmaker, but we'll have to see if he can stay on the field.

My point is that Seattle got REALLY lucky in the first few drafts of the P&J campaign.  It's not that they've done poorly since-- they've just fallen back to the median, as should be expected.

Now that you've taken a bird's eye view of the team's recent draft history-- are you still gung ho about trading Richard Sherman because you don't like his attitude?

We know that Seattle is extremely thin at cornerback.  Ditching Sherman would leave the cupboard bare.  How confident are you that Seattle can draft a cornerback that can come in and be even half as proficient as Sherman has been?

Keep in mind-- it's been 5 years since Seattle has drafted a starting cornerback that has produced for them. And that's not for lack of trying.  They've selected 5 other DB's since Jeremy Lane and none of them have contributed significantly.

Look. Seattle's championship window is still open. It won't be open forever.  If you offload Sherman in his prime, you're taking a tremendous step back.  Contracts are coming up for renewal in the next few seasons that could break up the band.  It doesn't make sense to dismantle something that works just in hopes that you might find something better.  One misstep with this and Seattle could potentially close their championship window on themselves.

I honestly don't think anything will come of this in spite of the media hype.  Pete Carroll has made it his mission to manage an assortment of different personalities together and get results.  He's done it time and time again.  For a Richard Sherman trade to go down, Pete would have to admit that he can't manage one specific player's attitude to the point that it affects the team and he's willing to lose because of it.

If you do trade Sherman, it's going to cost you a few wins.  I just can't see Pete to the point of throwing his hands up and saying 'let's rebuild'.