Aside from weaknesses in the Seattle secondary, there are other areas of needed improvement, and it’s possible that no position group needs to build upon their performance from last year more than the Seattle offensive line.  The Seahawks have seen their rushing statistics fall from an average of 5.3 yards per rush (2014) to 4.8 yards (2015), to only 3.9 yards per rush this last season (2016).
According to radio and TV interviews with Seahawks General Manager John Schneider and several other big decision makers throughout the league, offensive line talent in this year’s crop of prospects is not as deep as previous years, which may prove to have a major influence on the entire draft.  Because scouts do not see as many starting caliber talented offensive line prospects, it may force some of the good, but not great, prospects to be overdrafted by teams desperate to fill vacancies left by free agency.
If this scenario were to play out, I would expect John Schneider to shift his focus to another position group to add to, as Schneider historically drafts the most talented player on his draft board rather than drafting for need.  It may upset some to not see an offensive lineman as Seattle’s first draft selection, but people can rest assured that the player drafted will be a player the coaching staff and front office expect to be an impact player at some point. 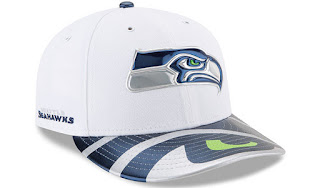 
The Seahawks have two of the top 60 draft selections (26, 58 overall), but don’t be surprised to see Schneider trade his first pick, as he’s done three of the last four years.


So, what are some other potential names Seahawks fans should start to get acquainted with?


OT Ryan Ramczyk (Wisconsin)
Ramczyk has the size, strength, and athleticism Seattle looks for in an offensive lineman, but due to the lack of depth at the position throughout the draft, it’s likely that Ramczyk gets overdrafted by a team before #26.
One of the few knocks on Ramczyk is that he has the height and athleticism, but he lacks the arm length (33 ½”) to be a starting caliber NFL tackle, and likely projects more as a guard.  Projecting to a guard may lower Ramczyk’s draft value due to a much lower premium on interior offensive lineman, which may benefit the Seahawks, if they see the value.  Seattle currently has a vacancy at Right Guard after Pete Carroll stated they intend to move last year’s first round pick, Germaine Ifedi, to Right Tackle.


Offensive Tackle/Offensive Guard Cam Robinson (Alabama)
Classic Pete Carroll type of player in Cam Robinson.  Carroll loves great athletic pedigree.  Robinson, a former 5-star high school recruit, ended up having to work his way through some adversity before regaining his potentially elite status.  Robinson has the physical make up to be an impact player at either guard or tackle position, drawing comparisons to another former first round Alabama offensive lineman drafted by Schneider and Carroll – LG James Carpenter.


Robinson’s consistency in pass protection is the major knock against him.  Teams may also show caution and not draft Robinson as high as his play would merit due to recent Alabama player’s dominance at the collegiate level not translating to the pros.  A player like Cam Robinson could be drafted as early as the middle of the first round, or linger to the end of the second round, but I expect to see his name called sooner than later.


Safety Budda Baker (Washington)
When you watch his tape, it’s hard to dismiss the Earl Thomas comparisons many draft pundits apply when analyzing University of Washington Safety Budda Baker.  Baker was the heartbeat of a Huskies defense that found itself in the national championship last year for the first time since 1991.


The one negative I have on Baker is that he drops too many balls that could otherwise be interceptions.  If he can learn to slow down and let the game come to him a little more, he could be dangerous.  Baker’s range, positional flexibility, and ability to cover on special teams make him an exceptional fit for the team needs of the Seattle Seahawks, who have already shown interest, by scheduling a prospect meeting with him at the NFL Combine.


Cornerback Kevin King (Washington)
Kevin King’s physical profile screams Pete Carroll-type corner.  He’s tall, he’s long, and he’s really fast.  King has Richard Sherman-like size and wingspan, yet King possesses the speed and vertical jump Richard Sherman only dreams of having.  I’m not saying King will ever be a better player than Sherman, but I am saying that King has a higher caliber toolbox when it comes to athleticism.
While I’d love a hometown prospect for the Seahawks, I do not see King being drafted at 26 by Seattle, but possibly so if he’s there in the 2nd (or 3rd…).  He’s a fun prospect, but he was never even the number one corner at UW; King regularly defended the second-best receiver on opposing teams due to his counterpart, Sidney Jones, taking on the challenge of covering opposing number one receivers.
This would be a player I could see Seattle drafting if they decided to trade back from their original first round pick, but not at 26 overall.


Outside Linebacker/Defensive End Tim Williams (Alabama)
The good thing about the Alabama defense is that there are so many great players, some of them don’t get as much of the spotlight as they would otherwise deserve, like last year’s second round pick by Seattle, former Alabama Defensive Tackle Jarran Reed.  Tim Williams is possibly another one of those hidden gems.


Williams is extremely quick off the snap, and uses leverage well when engaged, but he’s lean and will need to add more bulk to his frame once he gets to the NFL.  If drafted by Seattle, Williams could immediately add play-making ability to a vacancy at the SAM linebacker spot; a void created two years ago after Bruce Irvin left in free agency for Oakland.  Williams would also add high caliber depth at key pass rusher spots behind Cliff Avril and Frank Clark.


The Seahawks have brought Williams to Seattle for a private workout, showing there’s genuine interest.


Defensive Tackle/Defensive End Malik McDowell (Michigan State)
Perhaps one of the most volatile draft stocks this class has seen, McDowell has been projected by some to be a potential top-ten pick, while others have projected him to fall completely out of the first round.  McDowell entered the 2016 college season looking to cement his draft stock as a top first round pick, but did not complete the task after suffering injuries and not playing with the same intensity that earned him the national exposure and hype from the seasons before.


Drawing on-field comparrisons to San Francisco Defensive End DeForrest Buckner, by Pro Football Focus, there are still questions about McDowell’s motor and work ethic.  The Seahawks will do their due diligence, as they did with Robert Nkemdiche last year, but the Seahawks did pass up on a player with a similar make-up in last year’s draft.


Safety/Cornerback/Linebacker Jabrill Peppers (University of Michigan)
I love this prospect.  I love the versatility, the instincts, the play making ability.  What is not to like?!  Well, the way Peppers was utilized at the University of Michigan may possibly end up working against him.  As a Heisman finalist, college offenses would gameplan just to avoid giving Peppers playmaking opportunities that could affect the game, but those plans rarely worked.
Because Peppers was utilized in so many different ways, he never had the opportunity to really develop and focus on certain skills.  Meaning that Peppers skill-set and acumen is wide, but isn’t as deep as you’d expect.
Peppers will need to hone his skills to one position group and master one, rather than be a jack of all trades and master of none.
Outside Linebacker/Defensive End T.J. Watt (University of Wisconsin)
Watt is an interesting prospect on several levels.  First, he’s the younger brother of NFL superstar and former NFL Defensive MVP J.J. Watt, so that’s obviously going to turn heads.  Watt went to Wisconsin originally as an offensive player (Tight End), but after injuries plagued him and other team needs surfaced, Watt made the transition to defense, and never looked back.
In pass coverage, Watt has rare perspective after initially playing at the collegiate level as a pass catcher and blocker.  Theoretically, this allows him to more quickly diagnose and impact plays, and his game tape confirms it.  Watt possesses unique physical tools, standing at 6’5” with 33 ½” arms, Watt’s size allows him to engage and leverage his length against pass blockers, which means he could add immediate depth at defensive end while immediately slotting in as the new starting strongside linebacker.

And for my top pick at 26th overall, if the Seahawks do not trade back is...


Not often does a safety come out of the draft with the combination of size and speed that Melifonwu possesses.  Melifonwu’s professional comparison is, without surprise, Seattle Safety Kam Chancellor.  Both players possess rare size (6 feet 3 inches), but Melifonwu might already exceed Chancellor in his pass coverage ability, as Melifonwu is also being considered a potential cornerback prospect.
Melifonwu offers incredibly intriguing size and athleticism, but he also provides utility and flexibility by adding depth behind all three of Seattle’s key Legion of Boom members – Earl Thomas, Kam Chancellor, and Richard Sherman, while also immediately starting opposite Richard Sherman as the number two corner.
When you’re looking at a rare combination of size, speed, athleticism, utility, and flexibility, I’d say that’s about as unique as it gets.
Posted by Chris Collier at 11:28 AM