I've grown rather fond of the mid-season bye week over the years.  Seattle had been dealt some early byes the last few years and I've blamed those premature sabbaticals for late season attrition. Perhaps unfairly, but it was a scapegoat nevertheless.

This time around, I had my concerns. Will this break kill the momentum this team has going? Not only are they getting their break after winning 3 of the last 4 games, they'll be coming off a road trip to London and reembarking on another trip to Motor City-- where the Seahawks first Super Bowl dreams had died.

Turns out it was business as usual.

Russell Wilson had a perfect game, slinging 3 touchdowns and no interceptions with a perfect QBR.  Honestly, he should have had a fourth touchdown, but Doug Baldwin forgot how to drag his feet and Nick Vannett got called for going out of bounds, but I never saw it.

Chris Carson beat up Matt Patricia's defense, gashing them for 105 yards rushing and a touchdown.  Paired with Mike Davis and a little sprinkling of rushes from Wilson and Tyler Lockett, Seattle has become one of the best ground threats in the NFL. 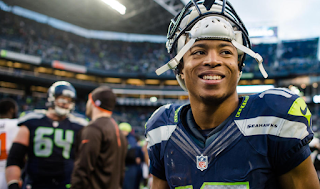 It's not just the mauling run game that's coming together-- the Seahawks pass catching group is really emerging.  Ed Dickson had his coming out party, snatching two balls, his first one for a Seahawks touchdown. David Moore posted a 4-97-1 line as his star continues to rise.  Wilson's trust in his receiver group is visibly improving with every game.

Tyler Lockett is swiftly becoming a superstar.  There were a lot of us that were concerned when he
signed his extension that he was being paid to be a type of player he had never been before.  An explosive returner and occasional playmaker ordinarily wouldn't be a priority resigning, especially with a disgruntled Earl Thomas campaigning for a new deal and guys like Frank Clark and Justin Coleman that are free agents at the end of this season.  The coaches saw what Tyler could be and decided to bet on that with his new contract-- and he's done nothing but live up to and exceed expectations.

Don't look now, but Seattle's defense is one of the league's finest.  No Kam, no Earl, no Sherm, no Avril, no Maxwell, no Sheldon-- no problem.  Seattle's defense is 4th in scoring and is gaining experience with every week. Far from the potential liability we expected this group to be, they were a big reason this team has won 4 of it's last 5, covering up for the offense's slow start.

With all of the great things that came out of yesterday's victory, perhaps none was more cool than seeing our rookie punter go rogue and get his first rushing first down.

Late in the game, the Seahawks found themselves pinned back against their endzone.  There was just over 2 minutes left to play. From what I understand, Michael Dickson was told to try to run the clock down to the two minute warning, taking a safety if necessary.  A safety would've resulted in the Lions getting only two points and then receiving a punt from Seattle that would be kicked from the 20 yard-line.

Even with the safety, the Lions would've found themselves still down by two scores, but with only a single timeout and no two minute warning. It would've been the safest bet to ensure the road victory.

In a post-game interview, Dickson recalled something Coach Carroll had said to him while in London.  He asked the Aussie "When are you gonna run one?"

Dickson said at the time, he thought the comment was made in jest.  It must have permeated into his subconscious, because as you'll see in the clip below, Dickson saw some daylight and he went for it.  A ballsy play that could've been disastrous, but instead sealed the game for Seattle.


Next week brings on a whole new set of challenges as the Seahawks prepare for their former divisional foes, the San Diego Los Angeles Chargers.  The good news for the Seahawks-- six of their final nine games are at home.

Posted by Chris Collier at 9:21 AM