Everything but the Win-- Seahawks 31 Rams 33

For the better part of 60 minutes, the Seattle Seahawks played the style of football you would hope to see every time you tune in.  Hard-nosed, smash-mouth, run-right-at them and take-calculated-shots-downfield type of football.  They overcame adversity, they forced turnovers, and they even had the good fortune of seeing their opponent miss an extra point.

Everything was going as best as could be expected, but the Seahawks could not close out the victory.

With just under 6 minutes left in the game, the Seahawks found themselves at their own 22 yard line, down just two points.  They had timeouts in their pocket and enough time remaining to continue pounding the rock while giving Russell Wilson the opportunity to do what he does best-- win a game with the last possession.

The Seahawks began by giving the ball to Carson for a mere 2 yards.  No problem.  Now the clock is
moving.  On the next play, Wilson creates a little magic and finds Tyler Lockett for a 44 yard gain.  This one is almost in the books. 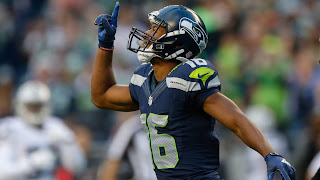 Then, Seattle began to choke.

The play doesn't get in on time.  Germain Ifedi is called for a false start that may as well have been a delay of game penalty. Again, no big deal.  Plenty of time.  Still in field goal range.  Don't stray from the gameplan.

Give the ball to Mike Davis.  Only two yards.  Don't panic.  Still in range and the clock is moving. The Rams have no timeouts left.

Next play, a give to Mike Davis for a modest gain of 5 yards.  Only, it isn't.  The play is called back on a bullshit holding penalty against DJ Fluker.  Shit, now we're out of field goal range.  Still, not to worry, a high-percentage pass will put you right back in Sebastian Janikowski's range even if it's short of a first down.

Hell, another modest run might suffice for the strong-legged Janikowski.

3rd and Long, Wilson incomplete to Lockett.  Now, you've got to punt.

You still have two timeouts and the two minute warning.  You might not have the formidable defense we've all grown accustomed to over the years, but you do have one of the most exciting, prolific young punters in the game.  Pin 'em back and force another punt.  You'll still have Russell with the ball in his hand and around 60 seconds to get back into Janikowski's range.

Michael Dickson, who had struggled earlier in the game, punted the ball a measly 24 yards to the Rams 21 yard line.  Not ideal, but a few stops could keep you alive.

First play of the next drive, Todd Gurley breaks a run of 12 yards.  Seahawks don't call a time out.  The probability of the Seahawks winning is drastically reduced. I would've stopped the clock here to refocus the defense, use the two minute warning as my second time out and still have one timeout left.

The next play is a two yard run, the clock runs down to two minutes. On the subsequent play, Gurley carries for 7 yards, just shy of the first down marker.  Seattle takes a timeout.  They have one remaining.

3rd & 1, Rams give to their MVP for no gain.  It's now 4th & 1 with the Rams on their own 42.  The offense hasn't left the field, but the punting unit is queued up nearby.  They take a measurement-- they're short.  The Rams ask for another measurement, no doubt to buy themselves more time to make the 4th down play call.  I have no idea why this was granted.  I can't recall ever seeing that before.  Nevertheless, the spot was measured again and once again, came up short.

Seattle then called it's final timeout.  Foolish decision.  You can argue that they wanted to give Wilson as much time as possible, but the benefit of the extra 40 seconds could not have benefited Wilson more than it did Rams coach Sean McVay and their offense.

McVay decided to keep the offense on the field.  Jared Goff kept the ball on a quarterback sneak and picked up the 6 inches that ultimately sealed Seattle's fate.

An otherwise well executed gameplan and outstanding physical performance was swept away and the Seahawks fell to 2-3 on the season, all but assuring the team will be, at best, fighting for a Wild Card spot.

There were a myriad of takeaways that should leave us all optimistic for the future of this team, but the reality is, they needed that home victory against perhaps the league's most complete team.  They had it and they blew it.

The team should get it's first international victory next weekend when they take on a miserable Oakland team in London on Sunday.  Despite the loss yesterday, the Seahawks did seem to find their identity in that game.  If they can play like that in every game for the rest of the season, it's hard to imagine this team missing the playoffs again this year, even if it is as a Wild Card entry.