The long wait is nearly over.  Tomorrow marks the beginning of the 2018 NFL Draft, ending months of speculation.

Recently, I was able to catch up with our pal and resident draft expert, Adam Householder.  He's so important now (his words), I was only permitted to ask him three questions pertaining to tomorrow's draft.

Enjoy!
1. The Seahawks have traded out of the first round 4 of the previous 5 drafts. Given their lack of mid-round picks, it seems an inevitability that they trade out of the first round again. What player, if available to them at 18, would merit the Seahawks making a pick rather than trading it? I think there are only a few players Seattle considers staying put for, but I’ll also qualify that and say I think it is highly unlikely Seattle does not trade back, if not multiple times. 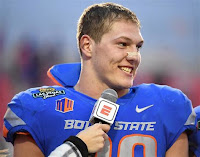 University of Washington DT Vita Vea would be one of those players. Yes, he is an incredible—perhaps generational—talent, but one of the main considerations that would justify staying put would be the value in his versatility. Losing Michael Bennett, and accepting the likelihood that last year’s first selection Malik McDowell may never play in a Seahawks uniform, there is a lot of room for an impactful player of Vea’s caliber. Another player the Seahawks consider staying put for is Leighton Vander Esch. Vander Esch has versatility as a pass rusher and versatile linebacker capable of any spot, but his ceiling is exceptional, and may be too tempting to pass on. 2. Seattle has more needs heading into this draft than anytime in recent memory. What do you see as their most pressing need? Who do you think can satisfy that need and what pick will Seattle take him?

The way I see it, Pete and John both want to win in the trenches and have a dominating run game. Seattle thrived on being the more physical team for years, and I believe they will look to get back to that with this draft. Possibly OG/C Billy Price or OT Kolton Miller.
A guy I’m personally not super high on but fits their profile could also be OG/C Austin Corbett. That being said, I don’t think the first pick will necessarily address Seattle’s biggest need—which I personally see as being a 5Tech DT/DE—but instead have exceptional upside and a path to opportunity.
Ultimately, I predict the Seahawks will end up with a handful of picks spreading between rounds 2 and 3.

3. Give us the name of a sleeper pick that you expect to go on day 2 or 3 who could have an immediate impact on this roster? Perhaps someone you think that could be a starter right away. One of my favorite prospects in this year’s draft as late pick but still be able to have an early impact is University of Michigan FB Khalid Hill. Hill originally went to Michigan as a TE before converting to a FB. Hill was used regularly and successfully as a short yardage back, in addition to his valuable skill set as an able receiver. Hill fits the Seahawks H-Back role perfectly and has the pedigree of coming out of a Harbaugh system—one both Pete and John have incredible respect for. My predictions for this draft will be multiple trades back, collecting a bevvy of picks between the second and third rounds, and then going after specific targets rather than wade through the clusters. In short, Schneider is about to go bananas. For the sake of ease, I have a few trade scenario predictions, but I think it’s possible Schneider makes more than five trades this draft. 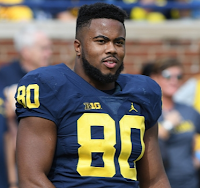 Adam Householder is a freelance reporter for the Snohomish Tribune and frequent contributor to SeahawksFTW.com