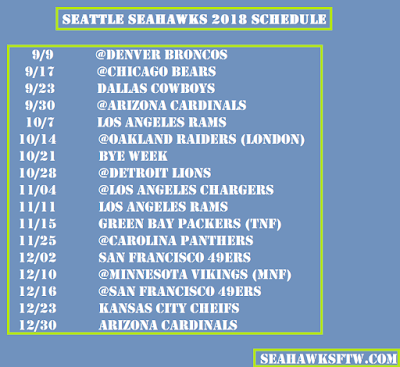 There you have it-- the Seahawks 2018 schedule is now official.

Altogether, it's a relatively favorable schedule.  Rough start with 5 of the first 7 games taking the team on the road, including the Seahawks first trip across the pond to London. However, they get a mid-season bye and a bevy of home games in the latter portion of the season.

Both games against the 49ers occur in the first half of December, almost guaranteeing that Richard Sherman will be active to face his former team. Seattle also reignites the rivalry against Aaron Rodgers on a Thursday Night game. The Fail Mary game was a prime time match up as well-- so brace yourselves for plenty of throwback references.

I like to stick by my idea that, if the team can start the season 4-2 or better, the playoffs are a reasonable expectation.  There's plenty of evidence suggesting they might just do that this year.  Denver is in a bit of a rebuild, Chicago is still unproven. Dallas comes in for the home opener with the momentum of the 12s in Seattle's corner. We don't yet know what to expect from Arizona, but I'm certainly not threatened by Sam Bradford. Hell, Carson Palmer had been healthier than him recently.

Rams will be the cream of the crop in the NFC West, at least until proven otherwise. I'll surrender that game to them, despite being at home. Oakland should rebound under Jon Gruden, but even if we lose the game in the UK-- Seattle should have a winning record heading into the bye.

It should be an exciting year we're looking forward to. With the draft coming up next Thursday, we'll be sure to call upon our resident draft expert, Adam Householder.  Stay tuned!
Posted by Chris Collier at 12:22 PM