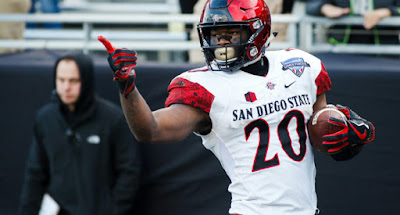 San Diego State's Rashaad Penny, the NCAA's leading rusher last season, was the Seahawks selection with the 27th pick in the 2018 Draft. This marks only the third time in franchise history that the Seahawks took a running back in the first round of the draft.

Warner went on to be the rookie of the year while being selected to three Pro Bowls before injuries prematurely ended his career. Alexander made three Pro Bowls and was named the 2005 MVP.  Both were home run draft picks.

That's a lot to live up to. Big shoes to fill, but Penny seems up for the challenge. There are many who think Seattle reached here, echoing the same concerns I remember hearing when Seattle took Bruce Irvin with the 15th pick in the 2012 Draft.

Perhaps the Seahawks could have traded down, acquired extra picks, and still ended up with Penny, but John Schneider would have us believe that one team tried to coerce him to trade Penny to them.

Just like the 2012 Draft, I'm thankful Seattle took their guy when they had the chance. Don't forget, they were able to pick up an additional 3rd and 6th round selections in the process. Penny looks to be incredibly versatile-- catching passes out of the backfield, running physically through the middle, and has tremendous lateral shiftiness in space.

The only knock on him seems to be with his abilities in pass protection. Penny himself has admitted this, but every indication is that he is a fast and willing learner.

I think the Seahawks had a tremendous first day of the draft. They accumulated much needed draft depth and addressed a major area of concern. Seattle has been deficient in there run game ever since Marshawn Lynch departed, largely in part to neglecting the position in previous drafts.

Below is a fascinating vignette that compares Penny against the second overall selection, Saquon Barkley. I think Barkley might be slightly faster and a little more explosive, but Penny appears more well-rounded and otherwise identical. All indcations are that he's a great kid off the field and a potential futre leader.

Posted by Chris Collier at 5:52 PM