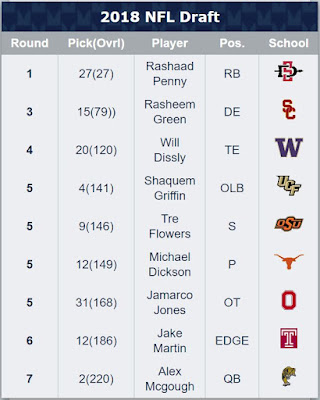 The 2018 draft has concluded and Seahawks fans should be thrilled with their team's latest additions. Having more needs than the past several drafts, the Seahawks had their work cut out for them. Especially considering their relative lack of pick depth.

Seattle hit on several major areas of need while executing the trademark trading back to accumulate additional draft picks.

My favorite pick was our very first.  After trading back a few spots to pick up an extra 3rd and 6th pick, the Seahawks pulled the trigger on San Diego State running back, Rashaad Penny.

This pick didn't win over all Seahawks fans.  There were many who thought they made the pick too early, something John Schneider promptly refuted, suggesting that there was a team that contacted him immediately after the selection in an attempt to pry Penny away from Schneider.

Others complained that our rushing woes were no fault of the current stable of Seahawks backs, but rather the offensive line to blame. I simply don't agree with this line of thinking.  Over the past few seasons, Seattle has invested in their offensive line considerably while relying on undrafted and unproven running backs.

It hasn't worked and it was looking like they were doomed to repeat themselves.  We all like Chris Carson, but turning the backfield keys directly over to him, coming off a serious injury with a small but impressive body of work would have been uncomfortably similar to what we did with Thomas Rawls in his second season.  You might remember-- that didn't work.

Penny lead all of college football in total yardage.  He figures to work in conjunction with Carson, McKissic, Davis and Prosise (if he can stay healthy) to form an impressive backfield group.

Seattle didn't neglect its line, either.  They added the best blocking tight end in the draft, local kid Will Dissly out of Washington, and took a long-armed Ohio State tackle, Jamarco Jones, late in the 5th round. 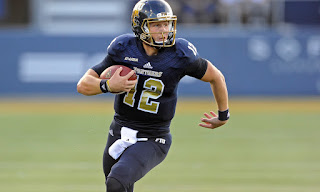 The undeniably most touching moment of the draft was when the Seahawks selected Shaquem Griffin in the fifth round, reuniting the Griffin twins in Seattle. Shaquem, whose brother was a rookie cornerback for the Seahawks last year, lost his left hand at 4 years old but went on to be the player of the year last season.  He figures to contribute heavily in special teams as a rookie.

The Seahawks hope they got their Michael Bennett of the future in 3rd round choice, Rasheem Green out of USC. Evidently, fifth round choice Tre Flowers is physically identical to Richard Sherman.  We will all be thrilled if these two come anywhere close to the production of their predecessors.

The most interesting draft choice made by the Seahawks this weekend was when they traded up with the Denver Broncos to draft Michael Dixon, a punter from Texas.  This move allegedly caused the Broncos war room to erupt with laughter.

What does this mean for Jon Ryan?  Likely, it spells the end of his long career in Seattle.  Ryan, the Ginja Ninja, is beloved by the fan base and is the longest tenured player on the team, but noticeably declined last season.  Ryan is still an extremely competent punter, so I hope that the Seahawks might be able to recoup a draft pick through a trade rather than outright cutting him.

With their last pick, the Seahawks drafted quarterback Alex McGough. I wasn't aware of McGough prior to his selection, but after watching his tape, I'm just as comfortable with him backing up Wilson this season as I am with Austin Davis or the other no-name guy on the team's depth chart.

Here's a list of undrafted free agents scooped up once the draft concluded.