The Seahawks responded to their miserable performance in Tampa Bay exactly how they were supposed to.  They put a 40-point thrashing on the defending NFC Champions while all but mathematically ending Carolina's playoff hopes.

Unfortunately, it's hard to look back on this game feeling anything but somber.  Early in the second quarter of last night's game, Earl Thomas and Kam Chancellor collided in mid air while going for an interception.  The safeties clacked their shins together resulting in a broken tibia for Earl Thomas that effectively ended his season.

Not but a half hour after being carted off the field, Thomas fired off a tweet that referenced the word 'retirement' and the collective hearts of Seahawks fans everywhere skipped a beat. Never mind that, just moments after that, he followed that tweet by jesting that Chancellor owes him a meal. 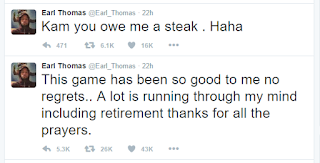 Without speaking for him, I think it's pretty plain to see that Earl was just expressing the bevy of emotions that he was experiencing in that moment. We've all been in those situations where something bad happens and we all assume the worst. Just because your girlfriend didn't immediately respond to your text doesn't necessarily suggest that she's cheating on you--  but sometimes your mind races all over when everything is so uncertain.

It was a strange game to say the least.

No one expected Derek Anderson under center when the Panthers opened up on offense.  It wasn't revealed until later in the game that Cam Newton was being punished for breaking a minor team rule, which was even later revealed that he lost the 'start' for not wearing a tie.

Anderson attempted a pass in the flats that bounced off the hands of his fullback into the arms of the Seahawks recently recovered linebacker, Mike Morgan, for an interception.  The Seahawks failed to convert the interception into a touchdown, instead settling for a Hauschka field goal.

It looked like Seattle was going to continue their offensive struggles into this game, but that was quickly proven wrong. Seattle finished the night with more than 500 yards of offense-- the sixth highest output in franchise history.

Just when we thought things couldn't get any more strange, there was a Beast Mode sighting.  Marshawn Lynch was on the sidelines, making the rounds giving love to his former teammates. 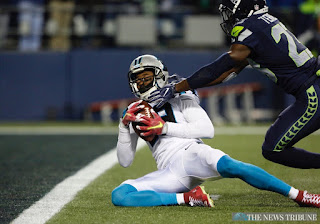 Despite not registering a single sack, Seattle's defense dominated the Panthers all night long.  In fact, the only touchdown Carolina had all night was one that should've never been credited. All scoring plays are reviewed, but somehow they missed this one.

To be perfectly honest, I'm not sure Carolina would've got any more than 3 points had the officials got the call right. Seattle's defense was ferocious and the 12's were deafening from start to finish. It's entirely possible that we could have witnessed a shut out, if not for the blown call.

Any doubt that may have carried over from last week's loss should but moot now.  The offensive line looked their best so far and we ran the ball spectacularly.  Baldwin, Kearse, Lockett and Graham were all involved and on point.  Russell is mobile once again and the defense seems to get better with every game.

The Seahawks play the Packers next week in snowy Lambeau Field.  I was worried about this game last week, knowing that Seattle would have to rely some semblance of a run game if they'd have any hope to win. Those fears were quelled after watching the dominant performance the Seahawks put on the leagues top-rated run defense.
Posted by Chris Collier at 5:33 PM