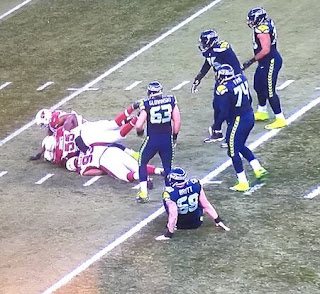 We're down to the final game of the regular season and this team looks every bit as uncertain as they did going into training camp.

Traditionally, under coach Pete Carroll, December is a month of dominance for the Seahawks.

Statistically, Russell Wilson is in a league of his own at this point in the season.

Additionally, the roster decisions that had us scratching our collective heads early on begin to come to fruition and help us see the vision the staff had for this roster from day one.

This year has been quite different, however.  The Seahawks are .500 this month and still plenty of
questions remain unanswered. Something isn't right with our rushing offense.  Whether it's the offensive line, an inconsistent Thomas Rawls or a combination of the two is a topic of debate.  The only thing we can be certain of this season is just how much Marshawn Lynch had meant to this team and how much we had taken his presence for granted.

I was at the game on Saturday, Christmas Eve, when they faced a Cardinals team that had had Super Bowl aspirations going into this season, but had long since collapsed and played their way out of playoff contention.  Sure, they have arguably the best, most complete running back in the NFL with David Johnson, but many and more of their star players are done for the season.  Half of their defensive starters seemed to be on IR.

The Seahawks were at home, relatively healthy and in dire need of some momentum to carry them into the playoffs.   Everything was lined up in Seattle's favor, yet somehow they squandered the opportunity.

Seattle fought through losing their best offensive weapon when Tyler Lockett went down with a broken leg and Wilson lead the team on a comeback to tie the game with about a minute left.  The stadium was raucous and the momentum had swung back into their favor.  All we needed was a 'gimme' extra point, a big kickoff and a stout defensive series to shore up the victory.

Haushka missed the PAT and Carson Palmer marched the Cardinals into field goal range where they kicked the game winner as time expired.

What a shitty way to begin the night before one of the most joyous days of the year.  However, it wasn't just the choke-job and losing Lockett that stung.  It wasn't even the fact that we basically handed the Falcons the number two seed and a first round bye.  The most painfully frustrating part of this weekend was the fear that accompanies uncertainty.

We have no idea what this team's identity is heading into the playoffs.

There's only one get-right game left in the regular season.  While it is about as soft of a landing as this team could hope for, shy of a regular season finale at home against Cleveland-- we've had 15 games to sort ourselves out, yet every week seems to raise more questions than it answers.

Here's a list of the teams that will likely make the playoffs in the NFC and their rank in offensive/defensive scoring:

The seeding won't be entirely finalized until the conclusion of the coming weekend's games, but Seattle will have their first playoff game at home.  I really hope the Seahawks put forth a good showing against San Francisco so us 12s can go into that playoff game with some confidence.
Posted by Chris Collier at 9:37 AM