The Seahawks were back in the spotlight on Thursday, sporting a vibrant, new look. As part of Nike's partnership with Thursday Night Football the Seahawks donned 'Action Green' uniforms that looked as though they might glow in the dark.

Unfortunately, the color was about the only thing that 'rushed' on Thursday.  Both teams combined for 119 yards on the ground (47 for LA, 72 for Seattle).  However, we did see a resurgence in Seattle's pass rush.  Seattle registered 4 sacks on the night.

Russell Wilson had an outstanding night, throwing for 3 touchdowns and one head-scratching interception. Tyler Lockett had a career game (while single handedly keeping my fantasy football playoff hopes alive) putting up 130 yards and a touchdown. 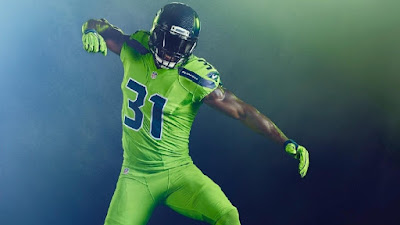 My favorite play was when Richard Sherman knocked Jared Goff out of the game with a good, clean
hit that saved a touchdown.  It would have been Jon Ryan's fake punt run that picked up 26 yards and a first down, had it not ended with Ryan getting knocked out cold.

Not only is Jon Ryan a top 5 punter-- he's a helluva athlete and a bad ass, to boot.

Seahawks have a pair of winnable division matchups to close out the season and are sitting well to get a first round bye for the playoffs. I will be in attendance for the game against the Cardinals on Christmas Eve and the one thing I want to see is marked improvement in the run game.

Thomas Rawls needs a 100 yard game.  I want to see Kelvin Taylor get some carries and show that he can be a complementary back down the stretch. The defense should continue to hold steady and the offense needs to shift to a pass-first mentality.

Most importantly, Seattle needs to string together a few wins to get momentum going in their favor to rally in the playoffs.
Posted by Chris Collier at 9:47 AM