The Seahawks looked bad on Sunday.  All we needed was a single touchdown to seal the deal, but it never came.  Aside from Russell Wilson, who accumulated more rushing yards in this game than he had in all of the previous games in this season combined, Seattle was once again unable do get anything out of their running backs.

Justin Britt was absent from the lineup due to a sprained ankle.  I hadn't heard anything about this leading up to the game and there was no mention on the broadcast.  He is expected to return Sunday, but Joey Hunt started in his place last week.

Center wasn't the only position that saw a new face.  Bradley Sowell started at right tackle in place of Garry Gilliam.  Not a move forced by an injury, but one of competition. 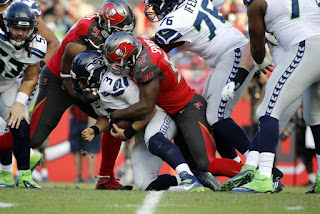 For the first time in franchise history, the Seahawks started three rookies across the offensive front. Needless to say, it didn't pan out as well as hoped.

Russell Wilson was sacked a disturbing six times in this game, proving that it might not be the best idea to monkey around with an offensive line that is already without its best player.

Just when it was beginning to look like Seattle might run the table to close out the season, they suffer this head-scratching defeat.  We have to hope that this is the wake up call this team needed to get their mind right for a playoff run.

The Seahawks have the defending NFC Champion Panthers this weekend before heading out to Lambeau to face the struggling but dangerous Packers.  After that, they will close out the season with divisional opponents.  Seattle could clinch the division title before Christmas, but the #2 seed in the NFC is what they should be gunning for.

We're all hoping to put this atrocious performance behind us and expect Seattle to come out swinging against the team that ended their season last year.  The Panthers are beat up and all but out of playoff contention, but I'm sure they would love to play the spoiler.