A Packers team with a hobbled Aaron Rodgers and a run game so disheveled that they're forced to start a receiver in the backfield absolutely destroyed the Seahawks on Sunday.

Green Bay came into this game annihilated by injuries with a defense that had been mediocre at best this season, but you'd never have guessed that by looking at the box score.

Seattle was awful. Embarrassingly bad. In a statement game, where a victory would've locked up the NFC West title, Seattle put on their worst performance of the Pete Carroll era.

As much as we would love to pin this loss on the absence of Earl Thomas, with a few exceptions, Thomas' absence was largely unnoticed.

The Seahawks pass rush was non-existent.  If not for a garbage time sack by Ahtyba Rubin, Seattle would have set a franchise record by going 3 consecutive games without registering a sack.  With everyone on the defensive front healthy-- it makes you wonder if Kris Richard and his defensive gameplan is to blame for the Seahawks recent defensive struggles.

The truth is, for the first time since coach Carroll took over, the Seahawks enter the final quarter of the season looking like a team that has no idea what it's identity is.

Russell Wilson had a career high 5 interceptions on the day.  Baldwin, Lockett, Kearse and Graham all had key dropped passes during the game and Wilson missed on at least a pair of passes that could have been touchdowns.

I don't get what we're doing with the run game, but it sure as hell isn't working.

The lone bright spot for Seattle was the performance of the recently acquired Marcel Reese. The former Washington Huskies stand out had a few big receptions in his Seahawks debut.

Outside of Reese, not one single player had a performance they should be proud of.

This should be a tremendous concern to everyone that follows the Seahawks.  Historically, this is the time of the season where the Seahawks have fought through adversity, sorted out their problems and taken on a full head of steam heading into the playoffs.

But this year has felt different.

We sill don't know who our offensive line starters are.  We have no consistency from our backfield.  I couldn't begin to describe the identity of the offense.

Defensively, things are different, too.

I would love to see the defense take more risks.  Man up and blitz to try to force turnovers and sacks.  It feels like they're in a perpetual state of bend-don't-break mentality from fear of the offense's ineptitude.

We know enough about this group of players by this point to realize where our strengths lie.  I think we can safely admit by now that we can't run the ball with any consistency without Marshawn Lynch.  Thomas Rawls only seems to be available for about 12 carries per game and everyone behind him on the depth chart is completely unreliable.  I'm counting down the days until this team comes to it's senses and releases Alex Collins.

We need to be spreading this offense out and throwing quick passes to account for the lack of a legitimate run game.  This would help with our blocking issues up front and make it harder for opposing defenses to disguise blitzes. 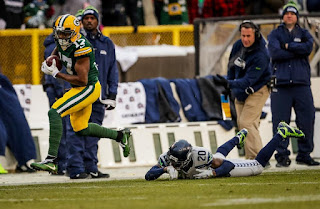 Playing more uptempo and with a sense of urgency would wear the defenses out more and soften them up for the bruising rushing style of Rawls. Since Rawls is showing to be more of a change of pace than an every down player, I think Tyler Lockett needs to line up in the backfield more, like Ty Montgomery does for Green Bay.

We have far too much of our salary cap resources tied to our receivers and quarterback to continue to pretend that the run game is the focus of this offense.

Doug Baldwin and Jermaine Kearse need to be relied on to carry this offense more.  Both were rewarded with contract extensions recently, yet they continue to be treated like secondary role players. While both of them have proven to be worthy and capable of fulfilling the criteria of a bigger role, the results for this season have been disappointing.

Neither Kearse nor Baldwin possess the top-tier speed to be a legitimate deep threat, but they are typically sure-handed and can break tackles in the open field. Their involvement would open up big play opportunities for Jimmy Graham, Tyler Lockett and Paul Richardson.  Kearse and Baldwin need to be the workhorse receivers we know they can be.  Bevell needs to give them the opportunity.

Seattle has a short week with a Thursday night match up at home against the Rams and games against the Cardinals and 49ers to finish out the season. Yesterday's loss may have cost us a first round bye in the playoffs. The Seahawks seem to want to make things as difficult as they possibly can in their efforts to win their second championship.

There is no reason not to expect them to win out these final three games, but we need to see them not only win, but figure themselves out in the process. We need to see some individuals step up and prove they can be counted on when their team needs them.
Posted by Chris Collier at 8:32 AM