Stop me if you've heard this one.

The NFL is a quarterback driven league.

Chances are, you've heard that phrase uttered ad nauseum.  Every coach, analyst, player, and talking-head alike has either used this phrase or is otherwise intimately familiar with it's sentiment.

It's a term so rudimentary, it's like saying 'life on earth is oxygen driven'.

An article titled "The Dynasty That Never Was" came out today on SI.com that is causing a stir throughout the football community. The premise of the article is essentially that Russell Wilson, along with Pete Carroll and John Schneider's faith in his abilities, are the primary cause of the Seahawks recent woes and ultimate undoing. 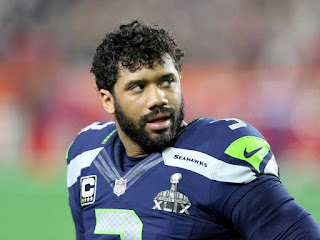 That could not be further from the truth.

The article, which directly quotes several former and recently outgoing Seahawks players, makes
them come off as entitled crybabies. With several players suggesting that Wilson is treated differently than everyone else, they complain that they did not receive their share of the accolades of the team's success while Russell skirted responsibility for the teams struggles.

There were a few things in the article that I agreed with.  Darrell Bevell's play call, Russell Wilson's ill-advised pass, and Ricardo Lockette's piss-poor attempt to get his body in position to make the game-winning catch in Super Bowl XLIX will never be lived down-- nor should they.  The fact that Pete Carroll subsequently lost the locker room is hard to deny, even for those of us on the outside. I even agree that the Seahawks lost sight of their philosophy in the wake of that Super Bowl loss-- a sentiment I was extremely vocal about throughout the past few seasons.

I encourage you to read the article for yourself, but here are some excerpts I personally took umbrage with:


Tony McDaniel, Richard Sherman and Cliff Avril were all on the record, along with anonymous sources, bitching about Russell Wilson getting preferential treatment. They claimed that Russell Wilson was never called out by the coaches in the media.

“We talked about that,” says Tony McDaniel, a defensive tackle with Seattle in 2013, ’14 and ’16. “Russell had his f----ups; he never got called out. If I was Pete Carroll, I’d tell Russell, I have to call you out in front of the team so there won’t be any problems.”


That might be a valid complaint if you can point to a single incident of Carroll calling out any of his players.  That's just not who Pete is.  He has consistently been shown to use optimism as his coaching method, never throwing a player under the bus no matter how deserving they might be.

The players go on to contend that Wilson was too 'emotionally fragile' to be held to the same standards as the others-- just before they whine about Russell not interacting enough with them at the company holiday party.

Russell's work ethic has been well-documented in the press.  Yet, these bitter ex-teammates have the audacity to suggest that Russell is too focused on his business and charitable efforts, "prioritizing his business efforts over football". That sentiment reeks of jealousy, if you ask me.

These guys go on to gripe about Russell being asked to be interviewed after the 2014 Championship Game victory, in which the Seahawks came back to defeat the Packers in spite of Wilson's four interceptions-- as if to suggest Pete Carroll should have yanked his ass off the podium as punishment for his turnovers.

Guys, if you don't understand that this is a QB driven league by now-- I don't know what to tell you.  Maybe you should've learned how to throw a football.

The most infuriating line from this article is the following, referencing the play call that cost the Seahawks a championship repeat:

"Many who lamented how Wilson was treated differently now believed, truly believed, that Carroll had called a pass play to give Wilson a better chance to win the Super Bowl MVP award and decrease Marshawn Lynch’s chances"

To suggest that thoughts of who might be the MVP recipient was anywhere close to the mind of Pete Carroll in that instance is profoundly ignorant. Astonishingly and embarrassingly ignorant.

That play will never be forgotten.  Those responsible (Wilson, Bevell, Lockette, Carroll) should never live it down.  It should motivate them every day for the rest of their lives.  That decision, as well as several subsequent moves the organization made, did fly in the face of Pete's mantra of being a run-first/defensively-stout team.  But it wasn't the fault of one specific person any more than it was a premeditation decision to get Wilson an MVP.

I completely understand how that move might have lost the trust of some people in the organization. Hell, I spent the better part of the following season questioning the response of Carroll and company.  I still don't think that the team responded properly, but after reading this article, I feel that no response would satisfy some of these salty veterans who came off as petulant.

“That one play changed the whole locker room,” McDaniel says. “When Pete would give a speech or try for a heart-to-heart, people just stopped responding. They didn’t know who to trust anymore.”

Like any good team that faces adversity, you have to learn to put this shit behind you and focus on the next game, the next season.  From the sounds of things, guys like McDaniel, Avril, Bennett and Sherman folded their arms and turned up their noses at Carroll's attempts to get past XLIX. I'm sure there are things that could've been handled differently by Carroll and his staff, but I'm not convinced in the slightest that those who felt spurned would have been receptive to any of it.


The quarterback took members of the offense and defense to Hawaii for a retreat before that season, to, according to sources, repair any lingering issues. But some lingered. “A lot of people felt like he was doing that to save face,” says one player who was there. “We were like, What is this? Why are we here? He was disingenuous."

Prime example right here.  Russell showed leadership by footing the bill to take the team to Hawaii to resolve past issues and move forward to the next opportunity.  Evidently, it wasn't enough for some.

They momentarily shift the focus of their vitriol from Wilson to the team's personnel decisions. They complain about the decisions to move on from players like Red Bryant (career quickly fizzled out after leaving Seattle), Bruce Irvin (couldn't afford to keep him, you know, because of all the Pro Bowl players on the defense already eating a handsome portion of the salary cap), Malcom Smith (Super Bowl MVP that has yet to be healthy for 16 games since leaving here) and Tony McDaniel, who was eventually lured out of unemployment to return to the team.

McDaniel was eventually brought back, in 2016, finding himself in a time-share with other players whom he argues he was outperforming. “I was one of the guys who came in, put my hat on and went to work. Didn’t complain, didn’t say much,” he says.

Well, he didn't complain until this article came out, anyway.
“Everything they preached about competition stopped being true,” says one former Seahawk. “It wasn’t like that anymore. The Kasen Williams move was one. The way they treated the running back situation for years, the offensive line. They would draft offensive lineman high and tell them, You’re a leader now. No, you earn that. It all became artificial.”
It's important to keep in perspective, Kasen Williams couldn't win a spot on the Cleveland Browns roster.  Yes, the same Cleveland Browns that have won one more NFL game than I personally have in the past two seasons.

We all saw this tension unfold throughout the past season.  Changes were going to need to be made.  The players knew it, the staff knew it, and even the fans could see it coming.

There were quite a few foolish opinions in that piece, but this might be the stupidest excerpt from that article:

In December, during what he thought was a private moment with Cowboys coach Jason Garrett after a game against Dallas, Thomas was caught on camera telling the coach, “If y’all got the chance to come get me, come get me.”


Now, I've been openly critical of Earl Thomas' perceived intellect, but even I was taken aback to read that he sincerely believed that his dumb ass, blatantly disrespectful decision to chase Jason Garrett through the back hallways of AT&T Stadium like a schoolgirl during Beatlemania was in any way 'a private moment'.

They say that it's never a good idea to meet your heroes.  Too often, you'll find out they're not as extraordinary as you'd held them up in your mind to be. This article proved just that-- these Seahawks players that are no longer part of the plan moving forward, but significant pieces of cherished past memories, are just as flawed as you and I.

I will always be bitter about XLIX.  Every Seahawks employee, player and fan that gives a shit should be.  But what matters most is how you handle that bitterness.  I'd like to think that I would align more with Russell Wilson and Pete Carroll.  Understanding that there is absolutely no benefit in holding on to anger, frustration and bitterness of the past and that letting go and moving forward is the only path to getting better.

I would certainly share the feelings expressed by the contributors of this article, but I wouldn't hold on to them as fervently as they have. I'm trying to put myself in their shoes.  For many of them, that may well have been their last shot at winning it all.  Something they'll never get back. Something, as a fan, I will never understand that feeling.

However, they need to understand that they are not coaches and general managers with a multitude of responsibilities to delicately juggle.  Tony McDaniel criticizing the Seahawks personnel decisions is almost as absurd as me criticizing his personal training regimen.  Neither of us have any experience dealing with those subjects.

It's not surprising to hear the criticism of Wilson. He plays the most criticized position in professional sports, he's a Charlie-Church/Bookworm kind of guy, and he has the one thing those guys will never have again-- youth and his best years ahead of him.

However, it is upsetting the cowardly manner they chose to air their grievances.  Real cool waiting until you're off the team and just two days before the regular season to release your sneak diss track.

Posted by Chris Collier at 7:15 AM