The Seahawks won their 2018 home opener against Dallas by actually adhering to their own philosophy.  They committed to the run, they played stout defense, they protected the ball and forced turnovers.

Like the previous two games-- Seahawks found themselves up against another fierce defensive front. Dallas came into this game as one of the top rated defenses in the league, which could've very easily discouraged the Seahawks from running the football, but it didn't.

Chris Carson carried the rock an impressive 32 times yesterday.  He became the first Seahawk running back since Marshawn Lynch to rush for 100 yards in a game.  Everyone of Carson's 102 yards were hard fought.

More impressively, he earned those yards behind a patchwork offensive line.  Seattle was without their starting center and left guard. DJ Fluker was back at the right guard spot, but Sweezy filled in for Pocic at left guard and Joey Hunt assumed the duties at center.

Earl Thomas continued his impressive season by adding a pair of interceptions to his stat line.   On the second interception, Thomas ran toward the Cowboy bench before taking a bow, which resulted in a taunting penalty. 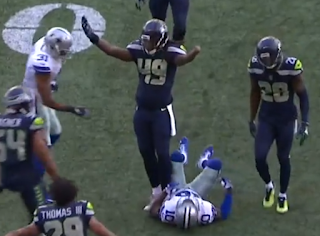 Where Earl finishes this season remains to be seen, but it's hard to view anyone other than the Seahawks of the benefactor of this peculiar situation.  They've continued to get excellent production from Thomas in spite of the noise and distractions.  As teams suffer critical losses in their secondaries across the league, you'd have to imagine that his trade value is only rising.

With each performance, the idea of keeping Earl sounds increasingly appetizing. However, it still appears evident to me that the Seahawks have no intentions of resigning to All Pro safety, so I continue to hope for a trade that could net Seattle draft picks that could put this team back into the Super Bowl discussion next season.

It feels great to get back into the win column.  The Seahawks have a reasonably favorable schedule for the next few weeks.  However, there is still a lot of work to do.

Now that the Seahawks have shown that they can establish a ground attack, they need to find ways to get their first round draft pick involved in their offense. Rashaad Penny and Mike Davis will need to see their touches increase going forward-- 32 rushing attempts from Carson is unsustainable.

Someone not named Marshall, Baldwin, Lockett or Dissley will need to emerge as a reliable weapon in the pass game.  That could be David Moore, Keenan Reynolds or maybe even someone not yet on the roster.  As this team awaits the return of it's leading receiver, someone other than Tyler Lockett has to earn the trust of the quarterback.

Hopefully, the Seahawks can find a road pass rush in Arizona next weekend.  It will be by far their least intimidating road environment they will have faced this season and it's possible they'll face rookie Josh Rosen in his very first NFL start.
Posted by Chris Collier at 10:23 AM