Everyone was prepared to deal with that-- but no identity?

This team is lost offensively.

Seattle's offense was downright atrocious last night.  The frustrating thing is that it didn't need to be that way.  The Seahawks started the game exactly how they needed-- by pounding the rock with Chris Carson. Even as they picked up that first conversion on the ground, I had a feeling it was only a matter of time before they got antsy and abandoned the ground attack.

"Unfortunately, we wanted to do better in the 3rd quarter." Pete Carroll said in his post game press conference. "I got Shotty (Offensive Coordinator Brian Schottenhiemer) to take a couple shots and look at a couple of things and it got them out of rhythm a little bit."

"It was my fault." Carroll added.  "I got them trying a little bit too hard, take a couple shots to see if we could bounce something back and get back into the game quickly and I shouldn't have done that." 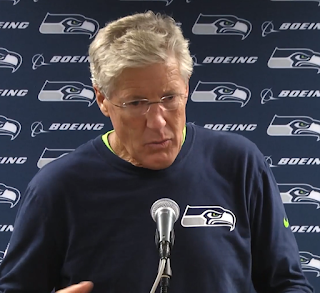 I'm glad the coach was able to confirm my suspicions.

If, like me, you've watched these first two Seahawks performances and come away feeling like the scheme and play calling do feel improved despite the statistical evidence suggesting otherwise-- this does provide some insight as to why we're feeling this way.

Wilson and Carroll are bringing bad habits from the previous regime into this new offense.

710 ESPN's Mike Salk made a comment in the wake of the loss to Denver that he did experience some De ja Bevell.  I think I've pinpointed what is causing this phenomenon.

Perhaps it's PTSD from the Bevell/Cable era, but in both of these games where Seattle had one-possession deficits with the ball in Wilson's hands late in the game, they've failed.

The one commonality I've seen between this season and previous years is the sense of panic the play caller demonstrates in the middle quarters of games where they abandon not just the run game, but all sensible fundamental football in general, in favor of praying to God that number 3 can pull a miracle out in a single play.

When pressed about his decision to effectively give up on Chris Carson, Pete said he was gassed from having to play special teams more than expected due to the team's injury woes.  A lame excuse even if that were true, but Carson played less special teams reps last night than he did in the previous game in Denver.

The Seahawks need to have one back, be it Carson or Rashaad Penny, carry the ball 20+ times in a game.  Win or lose, run the fucking football.  They need to establish trust, build rapport and instill some confidence in this offensive line if there is any hope for success down the road with this group.

Seattle has had one of the worst offensive lines in the league for almost half a decade now. Don't you think the constituents of this line are aware of that?  They have social media.  They watch ESPN.  They hear the criticisms loud and clear.

It seems like the past 40 games have seen the Seahawks turn away from the run immediately in favor of Wilson running for his life.  Wilson is among the best at making scrambles into highlight reel plays-- but it's a horrible strategy to base your entire offense around.  Not to mention, it exhausts your linemen and I would imagine, even if those plays net success, there's little feeling of accomplishment from the pass protectors in those situations.

Pete's admitted meddling aside, Seattle lost this game because of, not in spite of, Russell Wilson.

Whatever the reasons may be, he's not getting the job done.  He's holding onto the ball for far too long, giving up sacks, fumbles and putting the team in unmanageable down and distances. Even worse, he's seemed to given up on breaking off big runs on his scrambles, instead opting to pat the ball until someone gets open before pirouetting right into the arms of a defensive pass rusher.

These problems are fixable.  Perhaps that's the most frustrating aspect of our recent struggles-- these problems are completely avoidable.  They can design plays that get the ball out of Wilson's hands in 3 seconds.  It wouldn't kill Russell to throw a pump fake in every now and again, just to keep the safeties honest. I'd like to see them try to convert Keenan Reynolds into a Bobby Engram-type slant receiver that can be relied upon in those 3rd and 5 situations.

But it all starts with committing to running the football.

Running the football wears down defenders.  It builds continuity and confidence in your offensive line.  It opens up the play action pass. Play action opens up the bootleg, where Russell shines.  When you give up on the run, it emboldens defenses. It encourages the pass rush and blitzing.  It works against everything the Seahawks are supposedly trying to accomplish.

The Seahawks are finally coming home this weekend to face Earl Thomas' beloved Cowboys.  If Pete dares to suggest at any point this week that Seattle is 'a run-first team' I hope that he immediately follows it up with 'and I'm going to completely stay out of the management of our offense and let Shotty do his job'.

The patchwork defense did a marvelous job in spite of everything going against them, but this offense still has to carry the load.  Any game that the offense doesn't score a minimum of 4 touchdowns is more than likely going to be a loss this year.
Posted by Chris Collier at 10:21 AM