The 2018 new-look Seahawks were expected to experience some growing pains.  This game was sure to test the fortitude of the young roster with KJ Wright recovering from knee treatment and Earl Thomas only joining up with the team a few days ahead of the trip to Denver.  Factor in the high altitude and scorching temperatures-- the Seahawks had their work cut out for them.

Even with all the challenges they were facing, this was a game the Seahawks absolutely should have won.  Alas, they did not.

I'm left with mixed emotions in the wake of the Seahawks opener.  For every issue that had be screaming at my television, I could find another that filled me with hope for the long season ahead. Still, you're only promised 16 games and when you drop one that you could've had, frustration lingers. 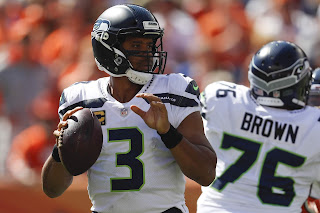 For all the struggles the Seahawks had, the one that bothers me the most was the late-game sacks that that Russell Wilson gave up on 3rd and short.  There were at least two in the final moments of the game where Russell inexplicably seemed to be looking down field, well beyond the first down
marker, only to give up a devastating loss of yards.

A veteran QB, no matter how mobile, needs to have the cognition to know where the line to gain is and get the ball out of his hand quickly-- especially against a ferocious pass rush like we saw from Denver's defensive front.

With about 11 minutes left in the game, the Seahawks were down 6 with plenty of time to mount what should have been the game winning drive.  They found themselves in 3rd & 3 on their own 27 yard line. They hadn't ran the ball well enough to even consider handing off to get the yards.  The

It ended up costing them the game.  It was a bad play call and worse decision making from #3. For those of you that were able to still stomach football after this loss and tuned in to the Sunday Night Football game, Aaron Rodgers hosted a clinic on getting the ball out of your hands early to disrupt an aggressive pass rush.

I hope the Seahawks were able to catch that game on the flight home.

Rodgers, on a bum knee, orchestrated a remarkable comeback after having been ruthlessly disrupted by a fierce Chicago defense for the entirety of the first half.  Rodgers returned calmly and picked apart the Bears defense.

Unlike Wilson, he didn't behave as though he had to make up the point disparity on every throw.  Rodgers got the ball out quick and methodically moved the chains. This put the Bears D on their heels, which opened up the run. Eventually, that opened things up for big plays in the passing game.

Sometimes, you have to take what the defense is giving you.  You also have to be mindful of not just your own limitations, but your team's limitations as well.  For years now, this concept seems to have been lost on both Carroll and Wilson.

I could drone on about this for pages upon pages, especially knowing that we'll be facing those same Bears a week from today, but instead I'll just hit on a few positives and negatives from yesterday's game and then we'll adjust our focus to next week.

I saw enough to have the hope that, if this team continues to develop young talent as they always have, this could very well be a playoff team. However, it is frustrating to no end when you lose a game, particularly on the road, where you had every opportunity to win.
Posted by Chris Collier at 9:09 AM